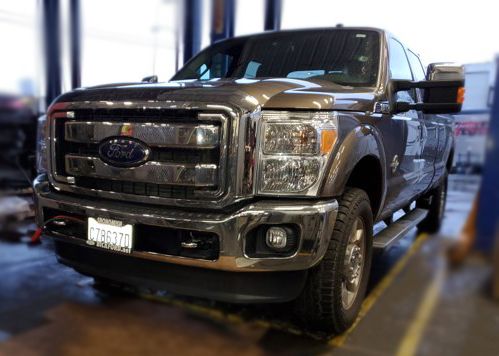 If you need an F250 front hitch or an F350 front hitch, this is where the Torklift front receiver hitch can meet all your needs. This front hitch is our favorite design yet because it hides right behind your license plate when you are not using it and the design does not detract from the look of your truck. Check out more details on this front mount hitch below.

This Ford F250 front hitch/F350 front hitch is ideal for your front tow hitch needs. Lets say you need a front hitch snow plow? This front trailer hitch can do it all – have you seen it’s towing and tongue weight capacities – they are unheard of! This front truck hitch can hold all types of accessories from trays to bike racks to snow plows and guess what – you will never have to modify your accessories to work with another front hitch ever again when you go with the Outland Front Hitch. Added bonus? Unlike other brands, it will not hang below your grill several inches resulting in loss of ground clearance and loss of your truck’s good looks. Don’t embarrass your truck. Insecure trucks rarely perform to their full potential.