Why John Glenney mows his lawn with a Tesla Model S 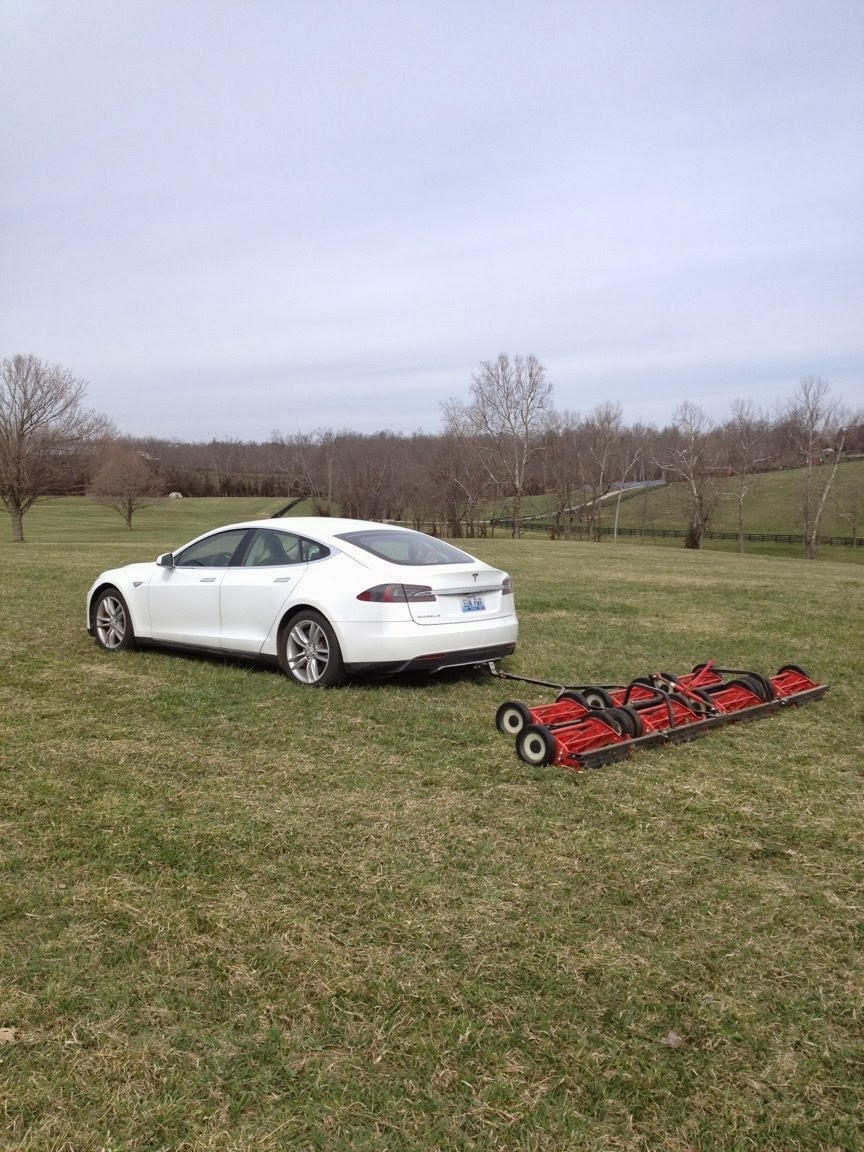 You probably wouldn’t notice it by looking at him, but John Glenney is an electric warrior.  Hailing from Lexington, Kentucky, he’s a farm owner, family man and the proud owner of three Tesla Model S’s.  Operating a small fleet of the all-electric vehicle qualifies him as a Tesla Head.  What he does with them is a whole other story.
Before John grabbed national headlines as the first person to make a cross-country trip along Tesla’s Super Charger network, he sent this curious picture to us at Torklift Central.
“I was trying to think of different ways I could do certain routine jobs around the farm,” he said.
Always an eco-conscious thinker, John began to theorize ways to accomplish the work of a gasoline-powered tractor without the pollution it produces.
He knew such a farm tool would need adequate torque, a big enough battery to last through a day’s list of duties…
“It occurred to me I was describing the Model S… I thought well, I’ll give it a shot.”

Shortly thereafter, the picture above hit the Internet and our Inbox.
It took us a second, but as the only manufacturer of a trailer hitch for the Tesla Model S, we soon deduced the photo was of John using his Tesla and EcoHitchto mow his lawn.
John posted the picture to Tesla forums where he first discovered the EcoHitch and sent it to anyone else he thought would have an interest in it.
“I was really impressed with how perfectly the EcoHitch attached to the most solid place on the car,” he said.
Since installing his EcoHitch, John sold the Ford F-350 he had been using around his farm and began to work more regularlywith his Model S.
“Basically it would do whatever I needed so I didn’t really need to use the pickup truck any more.  I thought well, I’ll trade that in, why not have three (Model S’s) and get rid of all the internal combustion cars?”
Despite how it may appear, John doesn’t use his Model S to conduct farm work as often or extensively as some may think.
“I don’t use the EcoHitch every day but it’s nice because its mostly hidden,” he says.
Whether farming with his Tesla or pioneering his way along the Super Charger network, it’s apparent John is on a mission to showcase the capabilities of all electric vehicles, not just the Model S.
“The cars sell themselves, people just have to actually be exposed to them,” he said.
John’s goal is to get people thinking about how eco-friendly vehicles can perform many of the functions normally reserved for internal combustion automobiles.  He leads by example and talks to people who are willing to listen.
When asked what it’s like to live with electric pride in Kentucky, he laughs.
“Lexington is a little bit different,” he said.  “Mark Twain said something like, ‘when I die I want to die in Kentucky because everything happens ten years later there.’”
Nonetheless, John is outgoing, friendly and happy to live in the Bluegrass State as the proud owner of three Model S’s.
“Whether it’s mowing the grass, pulling a trailer, or driving down the road and going 0-50 in three seconds, it turns peoples’ heads.  After a while they can’t ignore it.”
Categories: EcoHitch
Tags: torklift central, tesla, tesla model s, Cross Country Trip, John Glenney, Lawn Mower & Supercharger Network
Posted By: EcoHitch
Search
Recent Posts
Categories
Archives